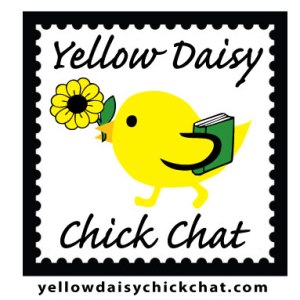 For those who thought the latter, congratulations, you were right! I do have a few thoughts to share about my first trip to Maine, aka Vacationland. Here are some of my main(e) musings:

1: Mainers. Apparently, this is the name they go by. A friend used this term, but I had heard Mainiacs as well. Whatever you call them, people in Maine are truly the nicest people! Granted, it was the beginning of the season, but the service people were super friendly and helpful. There were a lot of senior citizens there — not sure if they were tourists or locals or both — but they were not the grumpy kind. And that accent…how I do love an accent and the Boston/New England one ranks as one of my favorites. “Bah Hahbah,” “lobstah,” and anything the Kennedys have ever said ran through my head as I listened to the locals speak. We loved practicing our own version, but only my New Jerseyan hubby could do it worth a hoot. For some reason, my version had a little twang to it. 🙂

2: Food! Lobstah, blueberries, and whoopie pies, oh my! Trying the food specialties of a new place is probably my favorite thing to do on a trip. Nowadays, it is too easy to eat the same foods (chain restaurants), listen to the same music (satellite radio), and have the same experiences that you do at home. I like regional flavor, though, and want to see what people like and do in other parts of the world.

Thank goodness for the Internet and Yelp, which helped us choose fantastic restaurants. We had many a lobster roll, as well as steamed lobster, shrimp, scallops, fish, and chowder. I have a weird texture thing with lobster, but I do think I like the lobster claw meat the best. It was the most tender. Of course we did not skip dessert, and had plenty of blueberry pie, blueberry crisp, even a blueberry martini, and the kids’ favorite…the whoopie pies.

3: The cottage. We stayed in Eden Village in a cottage that looked online like the quintessential Maine lodging, so I was terrified that it would be a nightmare offline. At $89/night, I decided to risk it. My risk paid off, and the cottage was even more precious in person. The grounds were beautifully kept, with a pond and playground on site. I highly recommend it. 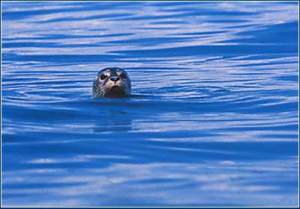 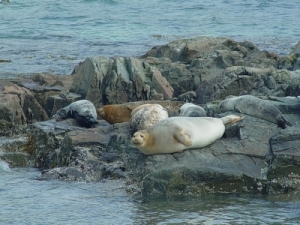 4: The harbor seals. We went on a nature cruise with the Bar Harbor Whale Watch Co. around Frenchman’s Bay. There was a rocky island where a gazillion harbor seals were lying around, like they had just eaten a family reunion dinner. The pups were swimming and playing, and would swim over closer to the boat to look at us. I don’t know why they did that, for food, or out of curiosity, but they were adorable. It really was like the adults were having a cocktail in their recliner while the kids played in the yard. A definite highlight!

5: Acadia. The park is a national gem. What a lovely place to hike, bike, car ride, picnic, or just be. Green, water, rock, mountains, coast, quiet…these are the first words that come to mind to describe the scenery. We love to take our kids, ages 11 and 7, to National Parks because we love doing outdoorsy things with them, and the price is right! For $10, we had a week pass to the park. For the whole family! That is a major deal for the money. Compare that to  Disney World!

I thought about that idea a lot while sitting on top of Cadillac Mountain. We pay enormous amounts of money to visit man-made attractions and almost nothing to experience this eye candy that no man or woman could craft. Likewise, women spend an ungodly amount of money on designer clothes/makeup/fake hair/plastic surgery in search of beauty, when most of them would be more beautiful going au naturel. Why is natural beauty, in its many forms, so underrated? I used to worry that fake beauty would skew us to the point that real beauty would no longer be the standard. Now, I realize that I appreciate natural beauty more because I’ve reached the saturation point with fake beauty in our culture.

I found a fun book in Bar Harbor in Sherman’s Books: The Way Life Should Be by Christina Baker Kline. It was the perfect vacation read, set in the Bar Harbor area, about a transplant from NYC who reboots her life in Maine. I read the first line to decide whether to buy it or not: “My grandmother is stirring the soup. ‘It’s almost ready,’ she says without turning around. “You want some?” I knew if it was about Maine and food, I was in.

In the novel, Baker Kline shares some of her main character’s recipes from her Italian background and Maine influences. This morning, I made Angela’s Maine Blueberry Muffins, and they are hands-down the best blueberry muffins I have ever made or tasted (and with blueberries from North Carolina.) I will leave you with the recipe…I hope you can get to Maine, but if you can’t, buy the book, make the muffins and you will have the next best thing.

2 c. unbleached all-purpose flour, plus 1 T. for the blueberries

Beat the butter and sugar until creamy. Add the milk and egg. Sift together the flour, baking powder, and salt and add to the creamed mixture, mixing until moist. Add the cinnamon and lemon zest. Toss blueberries with 1 T. flour, and fold them into the batter. Bake for 20 minutes or until springy to the touch.

Enjoy the beauty of your summer vacation, wherever it may be! Take care of yourselves and each other,

“Everyone needs beauty as well as bread, places to play in…where nature may heal and cheer and give strength to body and soul.” – John Muir