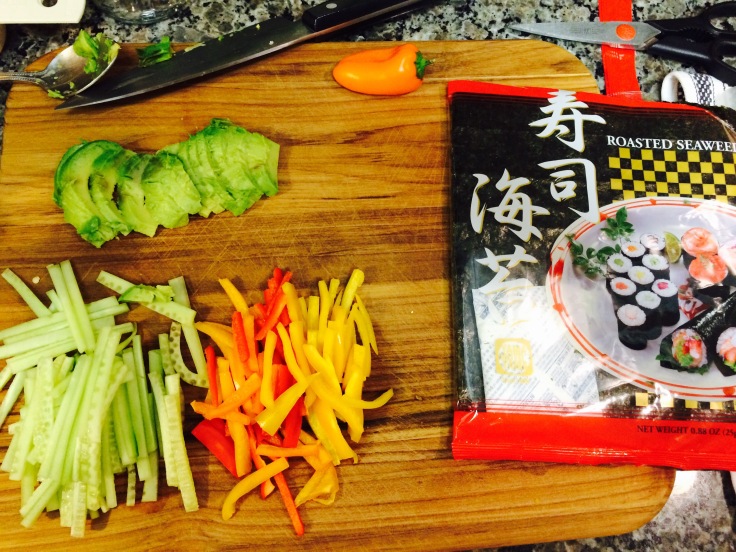 Wendy’s burgers and baked potatoes for busy kids on the run…’cause food bloggers are people, too! 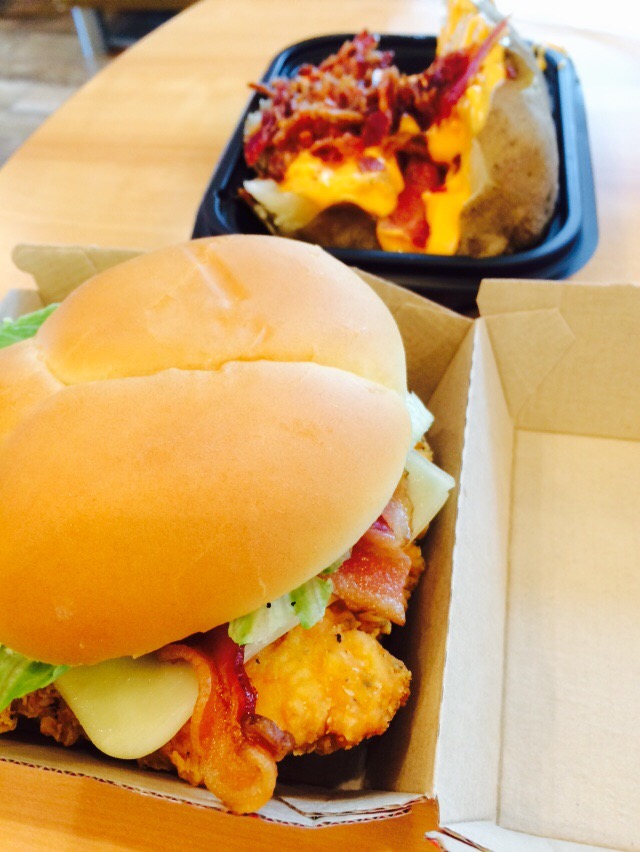 My Kroger has done the unthinkable. They have changed around all of the aisles. Like, every single aisle is different now. Look, folks…I don’t ask for much out of life. I’m the rare weirdo who actually enjoys grocery shopping, most of the time. I make out my list based on the order of the store…is that weird, too? I like an orderly, efficient grocery trip, what can I say? My time is limited, I like to shop for food but I want to get in and out as quickly as possible.

But now. The aisles have been put into a salad bowl, tossed around, and put back out in such a way that I can not find. anything. Yeah, it makes more sense to put all the snacks together. Yes, it might be better to have that huge area in the deli with tons of beautiful cheese, and fine, the produce department now looks amazing. But what about me? I’m so confused and frustrated and tired. It’s so hard to grocery shop now. I can’t get in and out. So what does a 21st century mom do for grocery-store-fail comfort? I went to Google for a meme, obviously. Luckily, there were more than enough to pull me through this difficult time in my life.

So then I found more memes. All about #grocerystorelife. I was into it.

And then, the very best one of all the grocery store fail memes. I bring you…Lolo.

So when your grocery store fails you, and you need to commiserate with the Internet, just find comfort knowing that it will not fail you. It will always be the incredible time sucker that you count on it to be, while taking your mind off your troubles of getting around Kroger, and make you laugh. And the next time you go to the Tossed Salad Kroger, you will think of Lolo lying in the cheese and all will be right with the world.

May your week be full of meaningful memes and empty of cheese-case selfies.

It’s our first full week of school and I’m trying to get back into cooking a healthy meal most nights. Summer was a lot of quick and easy…and a lot of late dinnertimes. With football practice and high school homework, I’ve been trying to get dinner on the table at a decent time. This meal was loved and devoured by my kids. I had some trouble getting the corn flakes to adhere to the fish but it was still good. I loved the ketchup but the kids were pretty meh about it. The overall work involved was too much for a weeknight. Save this one for the weekend or prep earlier. (Full disclosure: also added some sweet potato fries for starving, growing boy.) Peas and corn were from the Veggie Patch down the road…so so lucky to have their produce stand convenient to my house! Lady peas and sweet corn make any dinner rock! 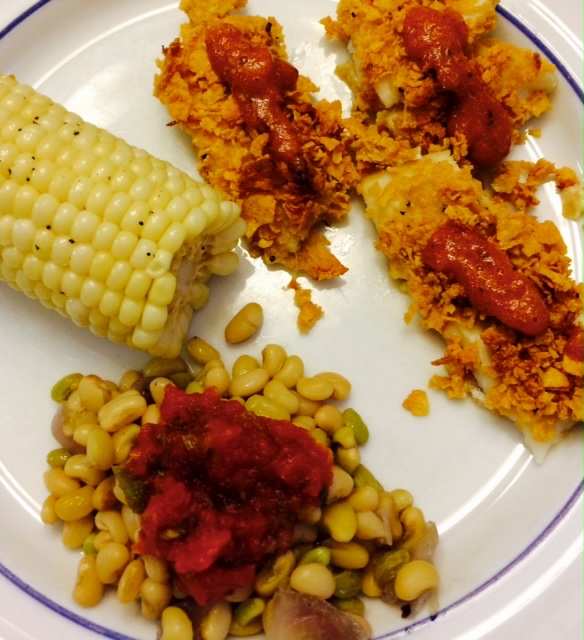 Back to School means back to structure, discipline, and schedules. For me, that also means back to better eating habits! For starters, I plan to implement more Meatless Monday dishes like this one to help counteract the summer snacking monsters we all turned into.

When Life Gives You Lemons…

I have always had a problem with that saying: “When life gives you lemons, make lemonade.” I get it; make the best of the situation. But I love lemons! I don’t mind for life to give me lemons. Lemons make everything better, fresher, zingier. There are a million things I can do with lemons. The saying just doesn’t work for me. How about, “when life gives you crap, make compost!” Or, “when life gives you anchovies on your pizza, pick them off!” I don’t know, I’ll keep working on it.

For me, lemons mean sweet or savory. Lemon spaghetti is as delicious as lemon poundcake. Lemon is to salad dressing as it is to pie as it is to vodka as it is to virtually making any dish better, even a glass of water. I love the smell, the bright color, the wheel-like slices in a glass of iced tea. Keep giving me lemons, Life! I got you, lemons.

To me, lemons are summer. And what says summer more than kids setting up a lemonade stand? Nothing, I tell you! As summer comes to an end for us in Georgia, I was reminded of the fun times I used to have as a kid selling lemonade to my neighbors. That led me to thinking about all of those summer plans I made in May to do with my kids: sleepovers, s’mores, catching lightning bugs, fixing up the treehouse, maybe even a movie night with a sheet over the garage as the screen. Many of these ideas were leftover from my own childhood. With a week of summer left, I realized that many of my plans had gone awry.

With one week to the day before school began, I proposed the Lemonade Stand idea with my girl and her friend. They were excited! I have now decided that there is nothing cuter than two ten-year-olds running a lemonade stand. They were all into it, and won’t be for much longer, so I jumped at the chance to help.

They wanted to make “fresh-squeezed” lemonade, so we did. That half-pitcher of hard work lasted less than 30 minutes, and we had to send dad out to get some not-so-fresh-squeezed-but-delicious Simply Lemonade.

The girls made a sign and decided to give half of their profits to cancer research and split the other half. They were energetic salesgirls…partly because they are ten and partly because of all the lemonade they kept drinking. They put together some dance routines and made up lyrics to “Uptown Funk” about selling lemonade. I watched them Whip. I watched them Nae Nae. They cracked me up!

After all was said and done, they had quite a successful venture. In two hours, they made $40. I am seriously considering setting up a stand every week and putting her to work on her college fund! Our neighbors and friends were wonderful supporters. We had a good time chatting with folks, and some friends even came by to visit and help. We gave our mail lady a free cup and thanked her for her excellent mail service. Happy customers, happy girls, happy mama.

I remember summertime back in the day — we had stands and made Country Time lemonade from the dry mix in the canister. We also made Kool-Aid from the little packets and loved it. I can still taste the grape flavor, my favorite. We would make popsicles with it in the little molds and have to wait FOREVER for it to freeze. We would write plays and act them out in the yard for our parents and be very serious about it. We would form club after club, and the oldest kid would always be the president (I was one of the oldest. I think I may have been annoying.) We made “newspapers” and used that weird carbon paper to make copies. We had fish frys with the neighbors, and go to the lake for the day with them and always get pizza for dinner on the way home…pizza was a big treat then, as was any kind of eating out. We would rejoice and fly out of the house when the ice cream man came down the street. We rode bikes with no hands around the neighborhood until dusk. We ran through the sprinklers. We played in creeks and caught crawdads.

We also did stupid things like make an Indian village out of an enormous sand pile on a vacant lot. We carved out little caves and my name was “Little Raccoon” because of my freckles. I loved it. But we were lucky it didn’t cave in on us! Mom wasn’t too happy about that one. We also climbed into the storm drains and walked underneath the streets. Mom was definitely NOT happy about that one. We didn’t wear much sunscreen. We didn’t wear helmets on bikes or even on the neighbor’s moped to Winn-Dixie to get our candy bars. Not sure if Mom knew about that one. Love you, Mom! xoxo

It wasn’t perfect but it was pretty great. Wow, do I sound old or what? My kids have much more structure in the summer than I did, for better or worse, and much more screen time, but I do try to give them some time to be bored, to come up with creative things to do, and to do things I enjoyed as a kid. As a parent, I’m realizing that my kids are getting older and many of the fun summer things from their younger days are gone with the wind. At the same time I’m realizing my time is limited with them, they are wanting to spread their wings out in the world. It is as it should be. It is bittersweet. Sometimes sour. But mostly sweet. Like lemonade.