All things are connected.

Even the white man cannot be exempt from the common destiny.

We may be brothers after all; we shall see.

This we know; the earth does not belong to man, man belongs to earth.

I should be reading Thomas Hardy right now. Or, working on topics for 2 new papers. Or, unpacking. But instead, I want to relive my trip to Utah so here it goes:

After a long day of travel and a hard sleep in the Jacuzzi suite, given to me as the “only non-smoking room left”, I ventured out into Ogden, Utah. The drive from the hotel in Layton to Weber State in Ogden was mountain-ringed and a delight for the eyes in  every direction. I love how the mountain towns out west feel so wide open; in Georgia, it feels a bit more closed in, in towns like Helen or Clayton. Salt Lake City is in a humongous valley, which accounts for the difference. 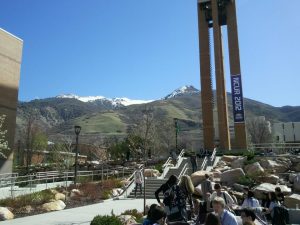 Upon arriving at Weber State for the National Conference on Undergraduate Research, I had even more lovely sights to see. The university is set into the mountains in the most gorgeous way. Those students are lucky to go to such a scenic school. I heard the first of 3 plenary speakers (plenary: more or less means the speaker was for all conference-goers): Mario Capecci. He just won a Nobel prize in physiology for genetic work, no big deal or anything. He was a huge deal! He talked about his research, which was over my head mostly, but then he told his life story. His father was killed in WW2, and his mother was sent to a concentration camp for her politics; he lived on the streets, I think in Italy, from age 4-9. Then the war was over, his mother actually lived and got out the camp and found him, in a hospital with malnutrition and dysentery. They moved to the US, and lived with her brother who lived in PA as a scientist. Mr. Carpecci learned from his uncle, went to Antioch and Harvard, and later, won a Nobel prize. Incredible.

He did not dwell on his childhood; actually, he focused on us, the students he was addressing. He emphasized doing what you love, finding your passion, and spend your life doing it. He didn’t sound like a stereotypical scientist at all. He sounded more like a writer.

Then, I went to do my presentation. I was ready to get it over with, and pretty nervous. I’m a writer, not a public speaker, after all. But I got through it, and had some interest in my paper. Unfortunately, I was so nervous, I really didn’t answer the questions well at all. It was my first time, and I don’t even care. I will learn from it. And, afterwards, I had a UWG editor of a publication ask me to send my paper to him to publish, and the moderator from Weber State referred me to a website for environmental literature, where she thought I might have some luck with publishing or presenting at a conference! Whew, that was a thrill! So, all in all, it was a good experience; and when you do things that scare the crap out of you, that’s when you feel most alive. Some people’s skydiving is my public speaking.

I also listened to 7 other presentations this day. The varying topics included King Lear, poetry, Wordsworth and Coleridge, queer theory and sexual categories, Romantic poetry and painting, and Chaucer. There are some smart young people out there…makes me hopeful about our future.

Today’s plenary speaker was Anne Fadiman, an award-winning author and Writer in Residence at Yale. Another Huge Deal. She spoke on her career as a writer, and on her book she wrote about a Hmong family and their dealings with the medical system in the US. Her book sounds fantastic, but I think I enjoyed hearing about her life as a writer even more. She started out as a journalist, and wrote her first book while she was a mother with young children. So, that spoke to me. She was funny but did serious work, both of which I aspire to. She also encouraged us to find a passion, and do it. As the Life Is Good people say, do what you love, love what you do. I can get on board with that.

After listening to a speaker on a comparison between Ben Franklin and Superman, which was awesome and should be in curricula across the education spectrum!, I met up with the fam for an afternoon and evening in Salt Lake City. First of all, it is a city where they do not have left-turn arrows, drivers who let you in, or easily obtainable alcohol. It is also a city of great beauty, both natural and man-made.

We enjoyed seeing the city from the rooftop of the LDS Church Office Building. The friendly guide gave us good info on the sights and took our picture. There was another family on the tour with us, with 6 young children and 1 on the way. The mother had dark circles under her eyes and had very little to say. The dad was very friendly and jolly. When they had their family picture made, they didn’t even notice that one of the children wasn’t in it until he ran up in the middle of photo-taking. These are my impressions. Talk amongst yourselves. 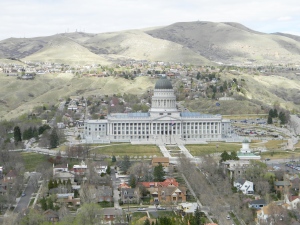 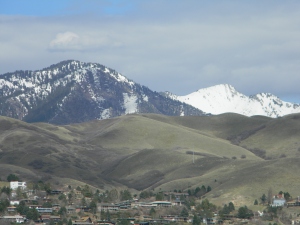 There is also major security in this building, with men in suits and earpieces. They are watching you and it is a bit unnerving. I guess this building and the whole Temple Square is akin to the Vatican. I can’t think of another city in the US that is as centered around a religion as this. Feel free to suggest one if you know one. They also have a certain policewoman who yelled rudely at me for jaywalking and, in front of my children, told me that the little man on the sign means to walk. When I told her there were no cars in the road, again in front of my children, she told me that we need to wait because “she would hate to see our kids get killed.” Okay, as much as I wanted to open a can of Georgia whoop-ass on her, I decided to continue on our way, talk about her behind her back, and comfort myself with the fact that I was glad to be in a city where the policepeople have little else to do but yell at moms who jaywalk.

From here, we went on our hike to Ensign Peak. The hike was supposed to be rated “Easy.” I guess the ratings are relative, because for those that know of Georgia’s Brasstown Bald hike: it was a longer, steeper, unpaved version of that! But it was worth it, and we loved it. This peak is where Brigham Young and his peeps gathered and looked out on the valley to plan out Salt Lake City. I gotta say, I’m no Mormon, but they picked a sweet place. If I wanted to find a place where I felt God, it would be here. These mountains, the Great Salt Lake, the weather…I felt God was here myself. These mountains humble you. You are insignificant, in the best way possible. 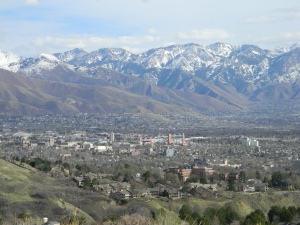 With wobbly legs and sunburned foreheads, we went looking for appetizers, Shirley Temples, and alcohol. We tried the Garden restaurant with views in the Joseph Smith Memorial Building, but we should’ve known better. There would be no alcohol found here. Of course. The building and gardens were beautiful, though.

Starving, cranky, and too many long waits to turn left, we finally found the part of SLC where we felt like everybody knew our name: Squatter’s Pub (http://www.squatters.com/.) Great apps, yummy Utah beer, and basketball on the tv’s. Yes, we were home.

On the way to the hotel, we weren’t that hungry, but I wanted to try an In ‘N Out Burger. I always hear the celebs talking about that place, so we shared burgers between the 4 of us. And they were good: very Five-Guys-ish, with a nice, toasted bun, flavorful patty (hopefully not pink slime), with a tasty Thousand Island spread. I’m a fan.

Needless to say, moments later, we fell in the bed and slept hard again.

The final plenary speaker was Paul Alan Cox, and again, not very accomplished; just a scientist who discovered a new drug to treat AIDS and another to treat ALS. I truly can’t believe I was in the presence of these amazing people. He told us how he did his research and how he found the plants that became drugs: through medicine men and women. After hearing him speak, I thought of how he was a good example of how science people and English people have more in common than I might think. We both are interested in people. He had a great sense of humor, and answered the crowd’s questions eloquently and humbly. I can learn a lot from these experienced speakers.

The conference having ended at this point, I drove with the fam to Park City for the rest of the day. The drive took about 45 minutes, and flew by with the entertaining scenery. We walked Main Street, as we see the celebs do during Sundance. There were cute shops and restaurants, and some good people watching. The day was super windy, so we tried to stay out of the weather. We all had mouths- and lungs-full of dust; the scenery had turned brown and hazy from the dust-up.

We also checked out the Olympic Park and the Olympic Oval for skating. The ski jump sites were cool, still with a little snow on top. We pretended we were Olympic figure skaters and hockey players while we hobbled around on the ice, looking like the Southerners we are. The hub still has some Jersey in him, as evidenced in his stellar skating ability.

I was looking for something to buy to remind me of my trip and Utah experience. The hub found a Native American store for me, and when I walked in, I found some pottery that was made by members of the tribe that I wrote my paper about, the Laguna Pueblos from New Mexico. I had chills when I saw the deer symbol on the pottery, pictures of which I had in my PowerPoint. Seeing it, I felt like my trip had come full circle. I couldn’t afford the huge $9500 piece, but I did buy a little bitty piece that I could still barely afford. I wanted to purchase that piece, to support the people who helped me get to this conference, and to remind me to take care of the environment like the Laguna Pueblos have for thousands of years. I told the shopkeeper, after she noticed my freak-out and I told her I was having a “moment.” She had been a little cool at first, but when I told her about my paper, she warmed right up and offered to find out who the artist is and email me the information. How awesome is that?! Maybe this paper isn’t finished just yet… 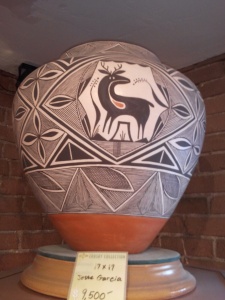 “There are some things worth more than money…This is where we come from, see. This sand, this stone, these trees, the vines, all the wildflowers. This earth keeps us going…the old people used to say that droughts happen when people forget, when people misbehave.” Josiah, from Leslie Marmon Silko’s Ceremony